It's been almost 4 weeks since the last post about my stay here. And I originally planned to write one each week. Oh, well. I don't really have any excuse. I was just either too busy or to tired, or just not in the mood to write something here. But I really wanted to write this last one piece, where I will try to capture what it was like and how I feel about flying back home in just 4 short days. But before I get to that, let's just quickly go over what I've been up to these last 4 weeks.

Mostly, it was work. As I said before, I have full time job here. Some of the tasks that I/we did during those last 4 weeks were fun, some of them not so much. But I definitely learnt something new, and that's good. It's also really good to actually work with other people. I know I keep re-iterating this in every post, but it's something that I am really grateful for. I've been really lucky in this regard.

Apart from work, there were three weekends during that time. One of them I spent just getting some rest because I was sick (ugh, I know..). The other two were much more interesting:

A week ago, I went to the Sequoia National park! And the best part is: I didn't go alone. It seemed that it's going to be just me, but at the last day, Kev, one of the people that I work with, decided to join me. It was really great. We went to Moro Rock, saw the General Sherman Tree and lots of other Sequoias, and generally we had a great time there. Also, it was interesting to get to know Kev a little bit more. 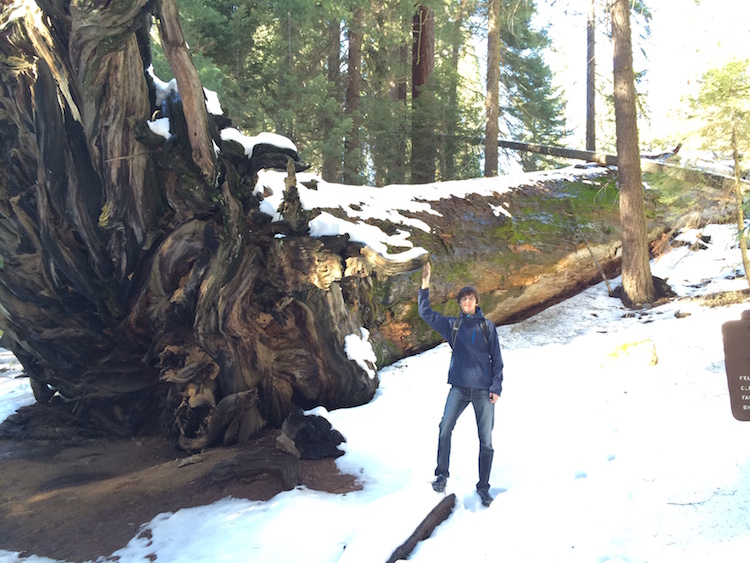 The last weekend I had, I decided to combine a few things together. Based mostly on Kev recommendation, I decided to go to Santa Monica mountains, namely to hike to the highest peak there - called Sandstone Peak. There were some amazing views, and I also met an exchange student from China there! We talked quite a lot and he seemed to be impressed with Routie, so that was quite gratifying. 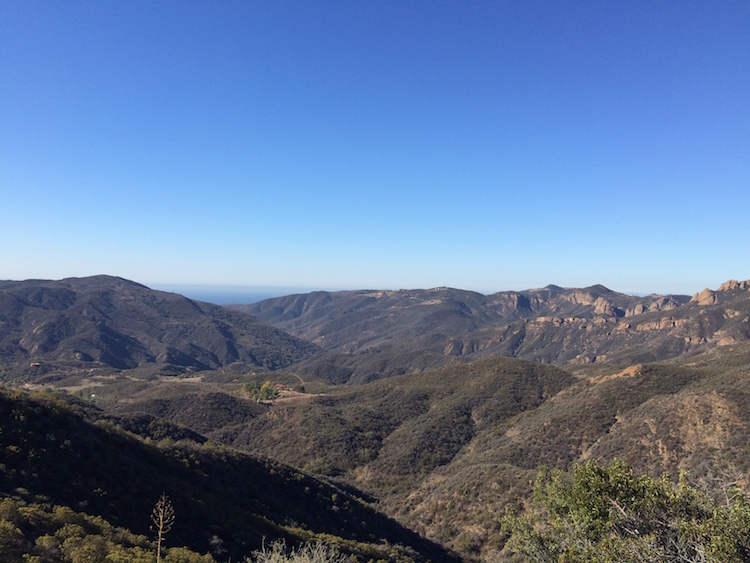 Then I went to Malibu and took a couple of walks along the beach. It's a nice little town, and just sitting for a while and looking at the ocean, the waves, and taking a few deep breaths - it was very soothing. 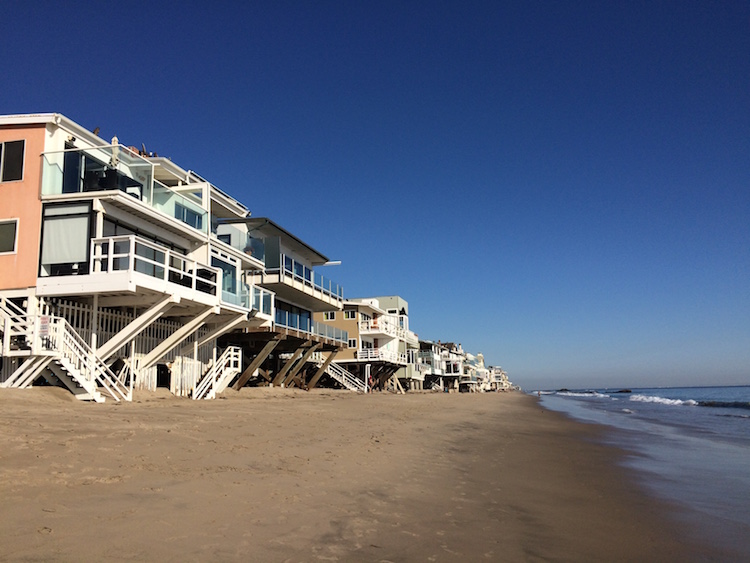 After that, I decided to go to see the Hollywood sign once again and to take a selfie there. I wanted to do that since I got here, and that was pretty much my last chance. I spent a while there trying to get the perfect angle, and I am quite satisfied with the result (you can judge for yourself). 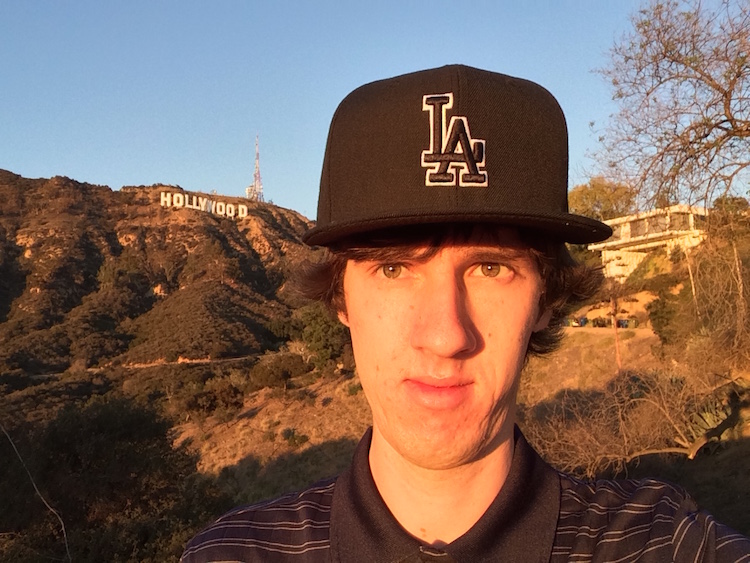 On Sunday, I went to The Grove (in Hollywood), and then to the LACMA (Los Angeles County Museum of Arts). What really spiked my interest was the Tar Pits, and the La Brea Tar Pits museum. Seeing skeletons and visualizations of animals that lived 20.000 years ago is quite fascinating.

Lastly, I went to the Runyon Canyon, and took a really short hike to the top. There were spectacular views of the city, and I also got to see a beautiful sunset. As I was watching the sun come down, I was pondering about those two months here. But more on that later.

I know this is a repeating theme, but I can't stress this enough. I was very lucky with pretty much all the people that I've met here. And I am so grateful for that. Definitely, the most significant one that I met here was Martin. We were here together for a month. We drove to work together. And we really got along well. Even though we only met here, by the time he was leaving, it really felt like we've known each other for quite some time. It was quite saddening when I drove him to the airport at the end of October, knowing that suddenly he won't be there with me anymore.

Regarding the work - everyone on the team is really nice. But I am most with touch with two people - Kev and Adam. Thanks to them, the job was 100% more interesting. I almost never got time to feel lonely. I enjoy grabbing lunch together, talking about all sorts of stuff. And getting to know them on a more personal level. They both seem to be going through tough times, each in very different way, but it has a common denominator: working long hours. I can see how this can have derogatory effect, but I don't feel to be in the position to just suggest a particular solution. I don't want to get into any more details, but I would just say: you are both very kind, light-hearted persons. It's going to be fine. Listen to your hearts, somehow it already knows what's best for you. That's what I am trying to do. And even though I struggle a lot, I have this inner feeling that it will all eventually work out.

I am also grateful for meeting Marián and Zuzka from Slovakia. It's been a pleasure to hang out with you here, and I loved learning new Slovakian words, among other things.

Last but definitelly not least - I enjoyed thoroughly attending NSCoderNight meet-ups in Santa Monica. I've met some very interesting people there, participated in fun & fascinating conversations, and generally always had a really good time. I also got to show off Routie and it was well received. What makes me happy is that I plan to go there tomorrow, for the last time before I am leaving.

I also enjoyed meeting Nicolas (@gomollon on Twitter) and learning about his endeavours as an iOS developer and also sharing mine. It was great!

I am also grateful for the ocassional conversations with strangers here, like that Chinese student on top of Sandstone Peak, or a man in the LACMA park who singed for himself.

I guess the point that I am trying to make is that I realized here more than ever before that people are truly important in your life. And that I should really take better care of my friendships. I haven't always thought about it that way. Now, I don't want to spill my guts here completely, so lets just leave it at this: I had some really bad experiences when I was a kid, and for a long time it was very hard for me to trust anybody. But I guess time does heal, and ever since then, it was slightly becoming better. And when you run into so many great people like I did here, it really puts things in whole another perspective.

So to all whom I met here. A big, honest:

But I am not finished yet (sorry, I know it's way too long already). One of my main goals with this article was to capture how I am feeling right now about leaving in just a few short days. The last few days were quite turbulent for me. I wasn't in a good place to write this. And I was reluctant, because when you plan to open up about something, you suddenly get insecure and it's hard to take the leap, and to even capture what you are thinking without altering it in the process of writing it.

That's why I decided to do something else today. I decided to include here an excerpt from today's entry in my 'journal' that I've been writing to every day for the last 9 months. I've learnt to be honest there and it comes naturally to me to tell things the way they really are. Partly because nobody reads it, usually not even I. So, here it is:

It's Monday evening, which means I have only 4 days left here. Just 4 :(. It's stressing me out a lot. Because I really got used to the way things are here. And for the most part, I really like it. That's why I am afraid of leaving all that behind. But I have to accept it. Hopefully, I won't feel that way once I am back home. Because what's weird and draining about the state that I am in now: I already miss all these people and all these things, even though I am still with them, even though I still have them. I can already imagine having all that as memories, that will just slowly fade away over time. That's what's making this really difficult for me. Also, two months is quite a long time. You really get used to stuff a lot. You get attached. You fully adapt to the day-to-day. And when you know you are about to loose all that, you get afraid. A bit sad, even. But hey, that's just how things work. There is no use dwelling over it more than I have to. In fact, I have already started making some plans for when I get back home. There are two get-togethers with friends shaping up, so I am looking forward to those. There is also that period of time when everybody will be asking about how the stay here was. So it's going to be nice to be able to tell them that it was pretty awesome. Also, I plan to catch up on a lot of my habits that I abandoned during my stay here. Like weekly reviews, monthly reviews, meditation, regular listening to podcasts, etc. So, even though I am loosing something here, I will gain something there. And I will be able to evaluate the stuff that I do with a fresh pair of eyes. And with a refreshed mind. See? It's really not that bad. That's what I love about these writings. It's often about trying to think out stuff using words. Trying to find ways to turn a negative into a positive, just like Adam said the other day. Often times, it works. Just like it worked today.

Okay, this is it! If you've made it all the way through here, thanks. I admire your attention span. Now if you'll excuse me, I need to go grab something for dinner. Until next time!