It's a really nice weather here in Prague right now. 23°C and sunshine. I just got home from Node5 a short while ago, rested for a while and then started with this post. I have a lot to cover today so lets get to it!

What I've been up to these last 3 days

On Monday evening, I spent half an hour tinkering with it and got the unit system working (so that Apple watch correctly displays values including units in user's unit system, and that it also gets updated whenever user changes the Unit system in settings).

Yesterday, I've spent most of the day working on it. I had to take care of all possible situations (user initiating the tracking from Apple Watch, user stopping tracking from device, etc..). There were some minor struggles but otherwise it went quite smoothly.

What was quite a surprise was the Glance view (Apple Watch users will be able to access Glances of their favorite applications by simply scrolling on the main page, and therefore Glances don't support interaction). Unlike normal Interface Controllers in WatchKit, you have to choose from a predefined set of layouts to use for your Glance view. I had to change my plans quite a bit because of it, and it turned out to be bigger inconvenience than I thought. In the end, this is what I ended up with for the Glance: 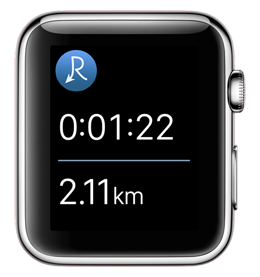 The icon for my Routie watch app was quite easy - I reused the shape and gradient from the iOS icon, and exported all required sizes using the invaluable App Icon Template created by Michael Flarup.

Here are some screenshots from the Routie Watch app itself: 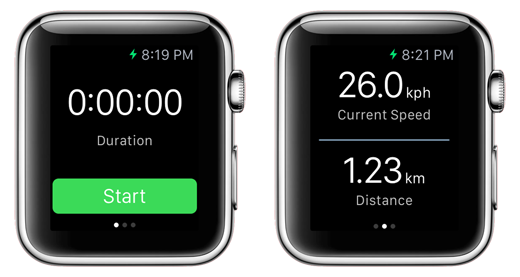 Submitting to the App Store for review

This took some time (1h 30m to be exact). Since Routie has a Today extension in addition to the Apple Watch extension, it needs three properly configured App Store provisioning profiles. And each of those profiles needs its own App ID.

Xcode wasn't very helpful so I had to set up those myself in the developer center. But that was the easy part..

Then, I had to create Archive for the app for the submission. I forgot a couple of things and then got rejected for not having the right icons (I made a mistake and included rounded icons instead of the squared ones, which is obviously a no-go.) -> because of that, I had to do the Archive multiple times, and each took about ~8 minutes (on my old 2009 MBP) because Xcode compiles the whole thing each time, and I have some 600 source files.

Then there were some hurdles in the iTunes Connect itself. I had to wait for the build to finish processing, and I had to upload screenshots. Then I was gently reminded that I have to upload all of the screenshots for each localization separately (seriously?). Anyway, long story short: I've stayed a bit longer in the office, and then:

At 20:35, the Routie 2.8 submission was successful. It is now waiting for review!

Now I can only hope that Apple will review (and approve) it in time for the launch. Preferably a few days earlier, because I'd like to try to attain some press coverage for it. The average is now 8 days so it's going to be tight at best.

I've spent the entire Monday working on it. In the morning, I finished all the things that needed to be finished/fixed/adjusted, and in the afternoon, I went to the company and dealt with some other issues with the help of their developers.

While the atmosphere there were friendly as usual, I was starting to loose my nerves from the things that we were dealing with. The fact that I was really tired probably played a big role. Usually, I am not like that. The project is really complex and there were some minor weird bugs that were nearly impossible to find, but we did track most of them down eventually.

There are now only three small things I need to do to finish it completely, so that's great. Hopefully I'll manage to do all of them tomorrow.

I've spent most of today (apart from short cycling in the morning) pushing forward my new website. I've said in previous posts that it's almost finished, and now it's like 99%. I am glad that I finished the landing page completely with the help of my web developer who did everything that I asked of him.

Then, I wrote down list of all the things that need to be done on the blog part and added them to a shared Wunderlist list that I have with my another web developer who is building the blog. Now it's his turn to finish those off, and then.. it will finally launch! I have some lessons from this whole process but I'll rather leave them for the time when the website is launched.

There are several. Let's start with the one that seemed trivial yet quite transformative.

The hidden power of compromises

When I was finishing the Apple Watch app, it was late afternoon, and I originally planned to add a pop-up sign up form inside the app for my upcoming app. But then I realized that it probably won't be as quick or as easy as I thought, and that I'd probably not finish it by the evening and therefore had to postpone the submission of the whole update. Long story short, I decided that it's more important to submit the update immediately then to have the sign-up form there.
I can always add it later, but I can't do anything about missing the day one of Apple Watch because of it.
Younger me would probably said to himself that he needs to have it there because he promised it to himself, and then would get frustrated that he is late with this other much more important thing. I guess what I am trying to say is this:

Not all compromises are bad. Being able to compromise at the right moment on the right thing, and being able to re-evaluate priorities in a timely manner are both valuable skills.

On Monday, I received my longly awaited books that I ordered from bookdepository. One of them is Copywriting: Successful writing for design, advertising and marketing by Mark Shaw. I've started reading it during my way to the company I am doing that app for, and it was really great! So much valuable insight that makes a lot of sense, and those were only the first few pages. I've pondered with the idea to learn more about copywriting for some time, but only now that I have this book do I realize the true power and advantages of becoming good in it.

Just off the top of my mind, here are some ideas from the book for writing great copy:

Focus on the benefits, not the features.

Aim at people who are already likely to buy from you, but only need that extra nudge.

It is much better for people to want to buy from you than for you to have to sell to them.

I can't wait to dive into it more. Among other things, it could help me a lot with writing intriguing copy for my new app and therefore increasing the odds of it being successful.

My plan for the following days

I am sorry the update was once again this long. Like the lesson about compromises and priorities, I have to set priorities on what I should and should not write about. And I have to come in terms that I can't fit everything here, and that a shorter format of these posts with more thought-through structure could be much better for readers, and even for me. But for now, have a great rest of the week! And don't forget to come back here on the Sunday evening.