This is what iOS developers got into their inbox from Apple last evening: 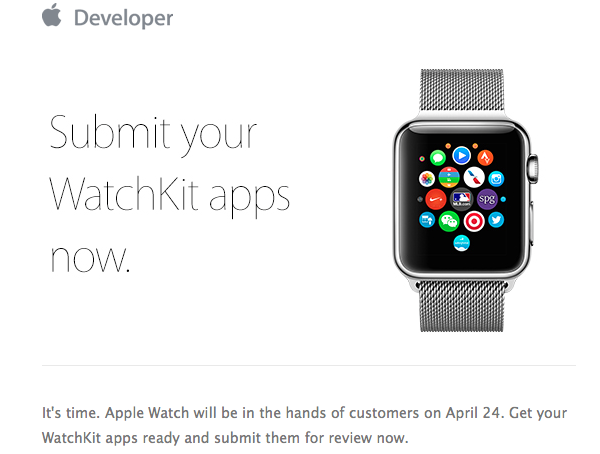 At first, I was taken by surprise.

If you are anywhere near the iOS developers community, or even moderate Apple fan, you know that Apple is about to start selling a new watch, called WATCH, on April 24.

Unsurprisingly, this is a huge deal. And even more so for developers who are in the Apple ecosystem, like me. My app Routie is perfect fit for the watch, and I knew from the moment they introduced it that I want to have the WATCH companion app ready and available for customers on the day one.

But.. in all those months, I didn't make the time to actually build it yet. Partly due to the extremely time-sucking client job I've been struggling with since mid-January.

The yesterday email was quite a wake up call. I know that if I want to have the watch app ready on day one, I need to ACT FAST. I need to give it the highest priority and postpone everything else. I need to start working on it, NOW.

So that's what I did, right..? Not exactly. Today, I spent almost whole day on the client job I've told you about. They needed to squeeze out some bugs and to make some minor adjustments, and before I know it, I spent my entire day working on it. Great! But I didn't have much choice, I've already took Monday and Tuesday off and I had to do it.

There is still hope

I haven't managed to work on it today, but I believe it is still possible for me to have it ready within reasonable amount of time and submit it to the App Store timely enough so it gets approved in time.

I promised in the About this project post that I will draw a lesson in each post. So today, I would like to take this lesson:

If there is an opportunity that comes only once in ~8 years, don't you dare let it slip!

I believe Apple Watch is that opportunity. With its 1.2 million apps, App Store is extremely crowded, but there most likely will be better visibility for Apple Watch Apps in the Watch Apps section, at least in the first couple of months.

So if you've thought about building an Apple Watch for your own iOS app, I highly suggest that you do it. And do it now. There might not be similar opportunity in a very long time. If you need more convincing, you should listen to the Release Notes #96: Unadulterated Good News.

There is still time

When iOS 8 launched, I submitted my iOS 8 update of Routie just ~4 days before the launch, and it still got approved by the day iOS 8 shipped.

And I expect this to be similar. It's in Apple's best interest to have as many Watch Apps as possible on Day one. So I believe they will speed up the approval process a bit.

If I should make a guestimate, I would say that if you submit your app by ~16 April, you should still be fine. But don't take my word for it. Obviously, the sooner the better!

And keep in mind, that..

..the clock is ticking.